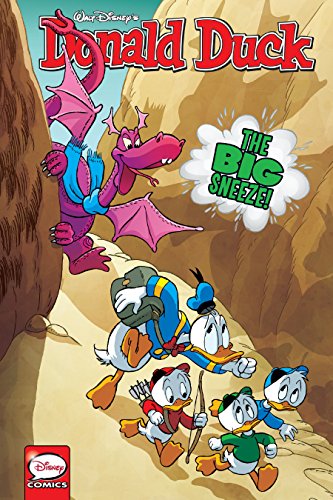 the following be dragons! carry onto your swords and shields… Donald and his naughty nephews are assembly mythic menaces via the megaton! First, set sail for dragon-ravaged Kooka Boola Island, the place a fractious Fountain of youngster turns sailors into babies—and Don and the men into geezers! subsequent, Donald rejoins the Tamers of Nonhuman Threats to save lots of an airfleet from plane-wrecking gremlins… yet can he shop his personal tail feathers from a crash? ultimately, in "The name of C'rruso," within the urban of Sp'too, deep below the ocean, dread Pf'legmwad lies dreaming… until eventually Donald wakes the mythical monster-god up! Collects IDW's Donald Duck #16–18.

Gathering AVENGERS (1963) #89-97. A clash of star-spanning proportions - with Earth stuck within the crossfire! For these everlasting intergalactic enemies, the cruel Kree and the shape-changing Skrulls, have long gone to warfare, and our planet is positioned at the entrance strains! Can Earth's Mightiest Heroes, the Avengers, lead to an finish to the scuffling with sooner than humanity turns into a casualty of warfare?

The prequel sequence to the best-selling game BATMAN: ARKHAM urban! The mysterious new villian referred to as the Bookbinder has corrupted Gotham City's foodstuff provide leaving the darkish Knight in a race opposed to time to determine the real reason and identification of this probability to the town. Collects Batman Arkham Unhinged 16-20

Collects Avengers (1963) #212-230. the top OF AN period! they are saying that satisfaction comes sooner than the autumn, and this tumultuous tome is facts of that! while longstanding and founding member Hank Pym -- in his guise as Yellowjacket -- demonstrates reckless habit in conflict, his fellow individuals time table a proper court-martial listening to which will make sure the destiny in their emotionally conflicted comrade.

For the 1st time, all 3 BATMAN VS. PREDATOR miniseries are amassed into one significant bloody assortment, together with the Eisner Award-winning BATMAN VS. PREDATOR #1-3 by way of Dave Gibbons (WATCHMEN), Adam Kubert (SUPERMAN: final SON) and Andy Kubert (DARK KNIGHT III: THE grasp RACE) in DC COMICS/DARK HORSE COMICS: BATMAN VS.